Melbourne, Australia is a family-friendly city often overlooked by overseas visitors emblazoned with the images of Sydney.   Unfortunately, we only had three full days in Melbourne and it’s hard to “do a city right” in such a short time.  With that in mind and the fact that my parents and I had been in Melbourne in 2006, I wanted to do a few things differently.  Here’s more information on what we found to do in Melbourne, plus tips for if you go with your family.

The first full day, while my parents were visiting friends outside of the city, we walked around Melbourne and enjoyed the Eureka Skydeck with our kids.  We made sure we were home in time to get to bed early and catch up on rest we missed out on while in Sydney.

The next day we wanted to leave for the Open around 2pm, so we spent the morning at Queen Victoria Market.  We’d been to Melbourne’s market 2006, but the QVM is definitely something to write home about, and worth a second look!  Plus, Mr. YT hadn’t been there and we wanted to show him what all of the hype was about.  Luckily, Queen Victoria Market was a short walk from our hotel. 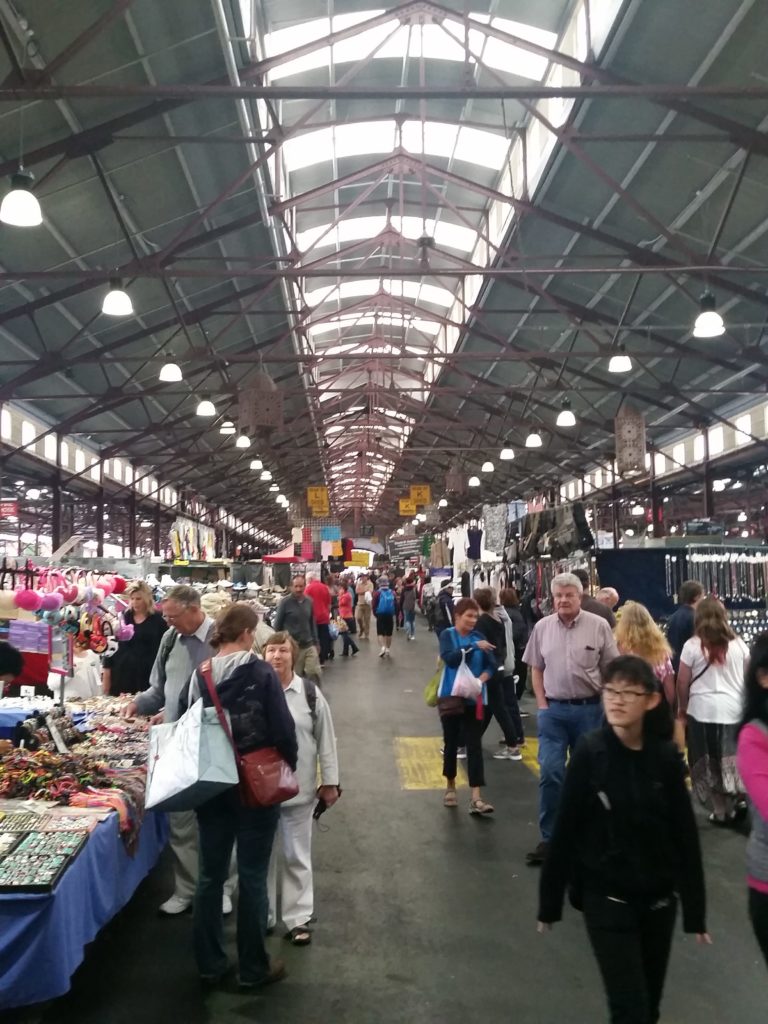 We spent the morning eyeing goods of all kinds- from touristy Australiana shirts to kangaroo jerky to Chinese-made toys and trinkets.  Our whole family scored a shirt or two, but the win of the day was 10 jam-filled donuts from American Donuts (no joke!) and a pavlova sponge cake from a local baker (who told Mr. YT and I we need to start watching TV and stop reproducing- 20 points for Aussie honestly, haha).

After dodging raindrops back to our hotel, Mr. YT and I left for the Australian Open.  Not only was this something we’d looked forward to for MONTHS, but it was also only our second time alone on the entire trip (#neededabreak).

Unfortunately, when we arrived it was starting to rain and it turned very chilly.  Play was suspended on the outside courts so we headed inside to watch the women’s doubles final.  Martina Hingis and Sania Mirza won and it was fun to watch a presentation of the trophies!

What we were most excited about was watching Andy Murray v. Milos Raonic in the men’s semifinal.  I have always had a soft spot for Andy, he’s usually the underdog. Rod Laver Arena was smaller than we expected (or it looks on TV). It holds 15k people.  We were thrilled that the match went to 5 sets and we definitely got our money’s worth. Ha!

If you haven’t been to a professional tennis match, please go!  It is my favorite sport to watch because, for the most part, the fans are quiet and civil, yet the sport is fast-paced…and they serve sparkling wine.  🙂

Our only regret was that we’d gone to the earlier rounds.  Since this was the semifinal, there wasn’t a lot of buzz outside of the stadiums.  The weather didn’t help.  Because we planned our trip around having Australia Day in Sydney, and meeting up with friends while they were on school holidays, it’s just the way it had to be. 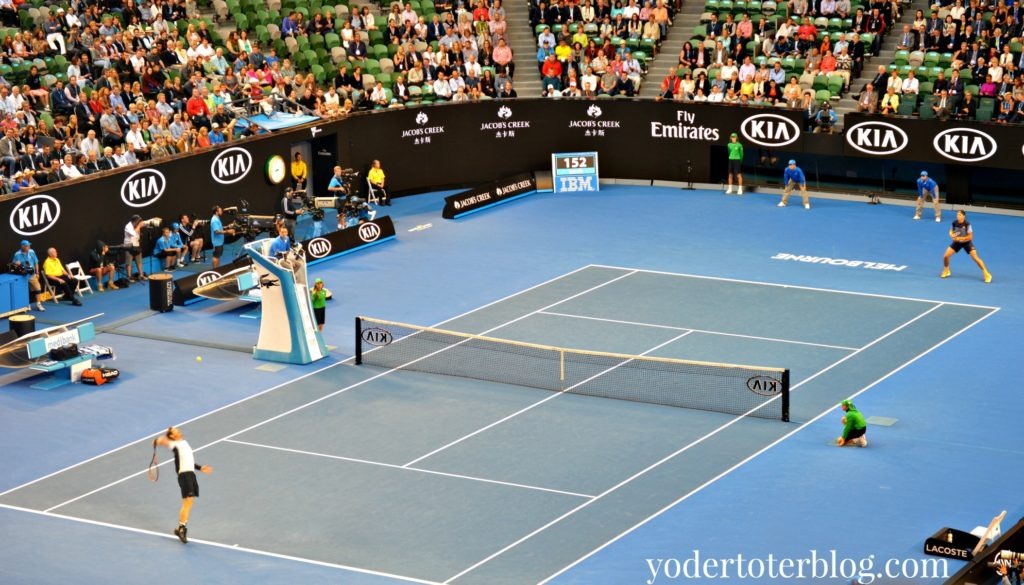 Getting to the Australian Open

Ticketholders can catch a free tram to Melbourne Park that departs near Flinders Street Station.  We used this tram to get to the park.  On the way home, the trams were FULL, so we opted to walk.  From the park to the Quest on William, it took us about 40 minutes of brisk walking.

The next morning we were at the front desk bright and early to meet our scheduled tour.  We’d booked a Wild Wombat Winery tour so we could see more of the Yarra Valley.  At a cost of $175 AUD per adult (approx $122 USD) and free for kids, it was an expensive option, but we avoided the drama of having to pick up a rental van.  Now there were 8 of us, since my Aussie bff, Briony, flew to Melbourne to join us. 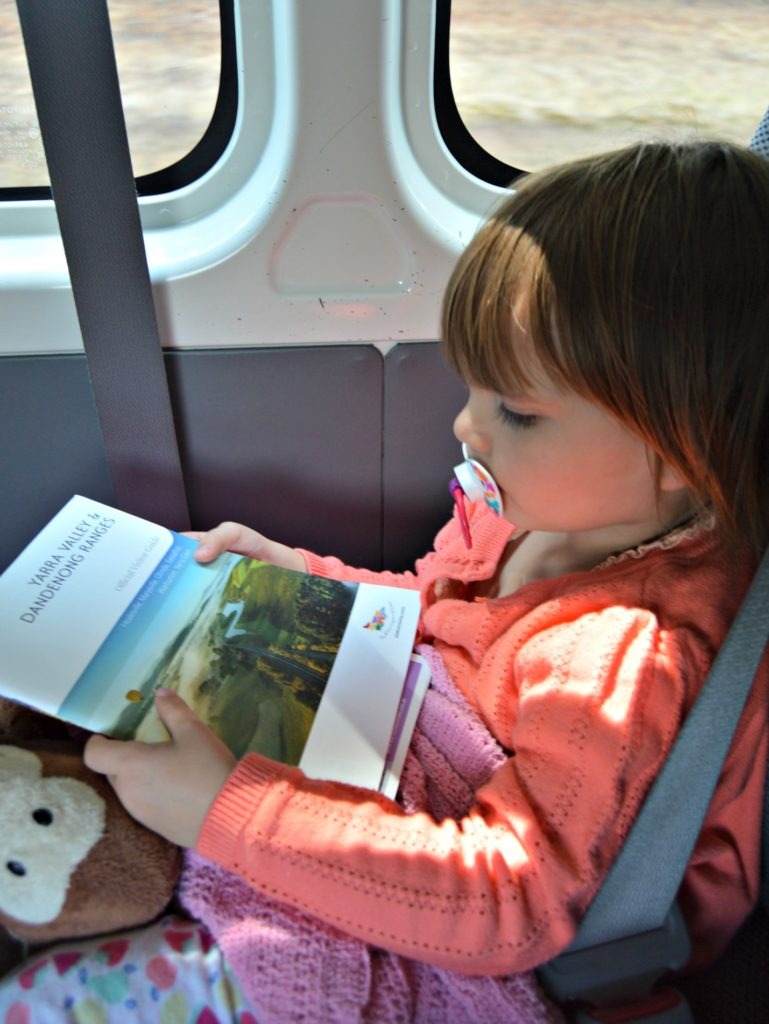 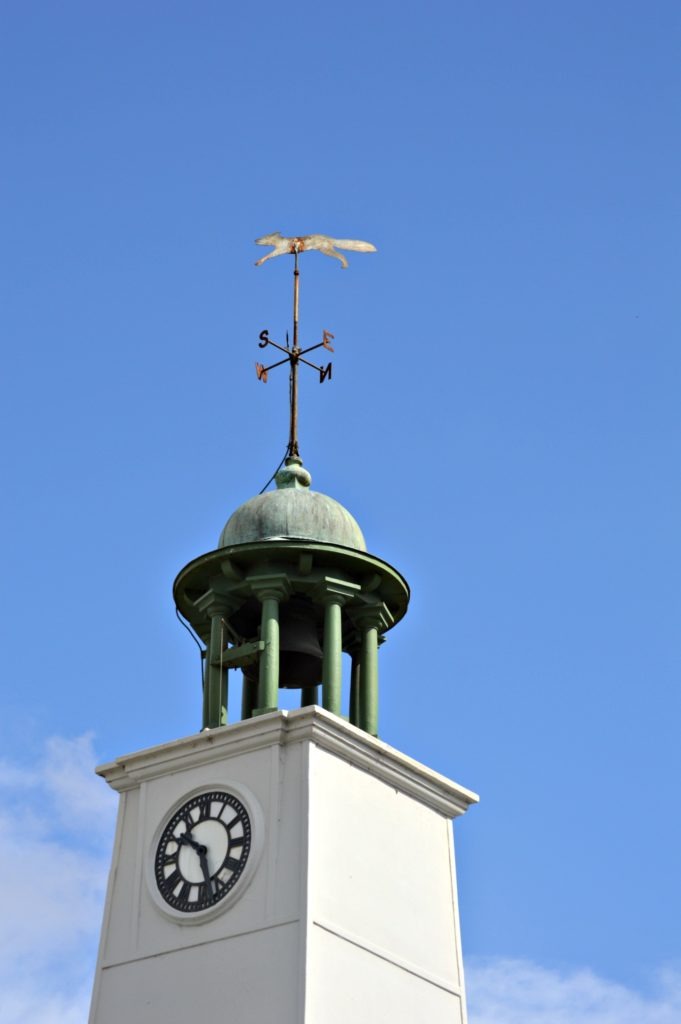 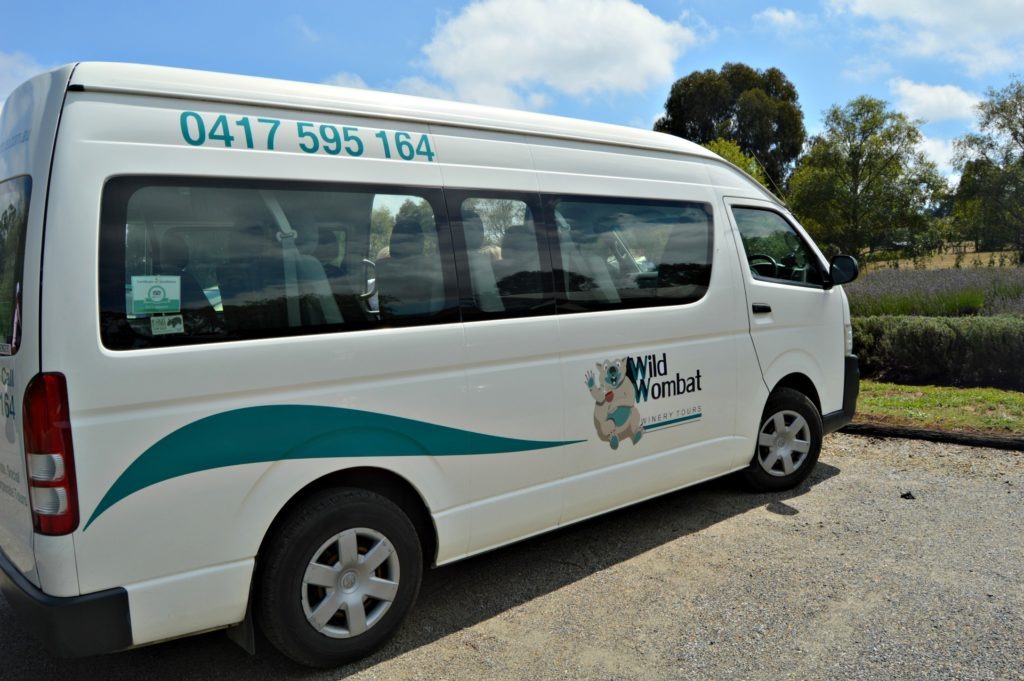 We were given a 12-passenger van (an Aussie Yoder Toter, YES), and so we had plenty of room to spread out.  The children weren’t required to be in car seats, which was nice, but also a little scary at times!  The first thing the guide said to us was, “I’ve never had children on a winery tour.”  Ahhhh- haha!  It wasn’t all about the wine for us, we hoped to get a better feel for the region.

Our first stop was Coombe Yarra Valley, once the Australian home for the famous opera singer, Nellie Melba. The adjoining Melba Estate looks like the perfect place to enjoy high tea- or a wedding reception.  Next, we popped into Warratina Lavender Farm.  While the lavender had been harvested about a month earlier, the place still offered beautiful views and delicious snacks.  We tried the lavender scones and lavender milkshake and I was pleasantly surprised 1.) that you could eat lavender!  and 2.) that they tasted good. 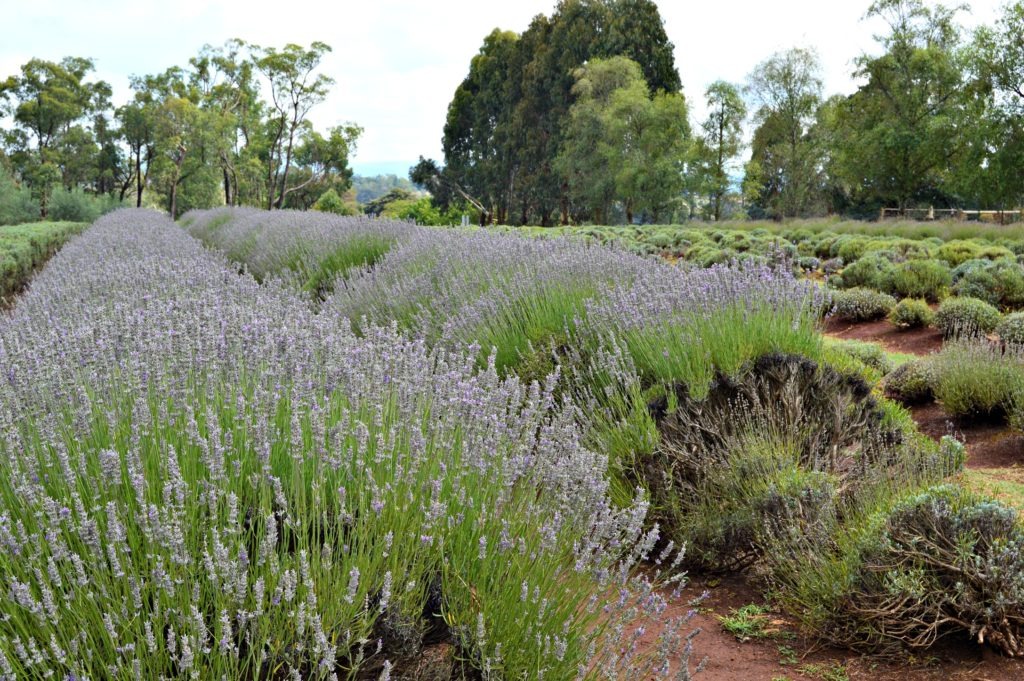 It was about lunchtime now, even though we’d just gobbled up our morning tea (i.e. brunch), but our guide drove us to Immerse Winery where we enjoyed a tasting and probably one of the best meals of my life.  When we walked in, Briony and I looked at each other and said, “Um, can we eat here with kids?”  because there was so much glass, but our kids really rose to the occasion and were well-behaved for our wined-and-dined experience.

After lunch, we could have all used a NAP, but our guide assured us that the next place was worth the stop.  Not only were the views at Sutherland Estate the perfect backdrop for photos, on the way up the hill we spotted an echidna IN THE WILD.  This is rare, folks.  Echidnas are like Aussie porcupines, except they have a long snout. 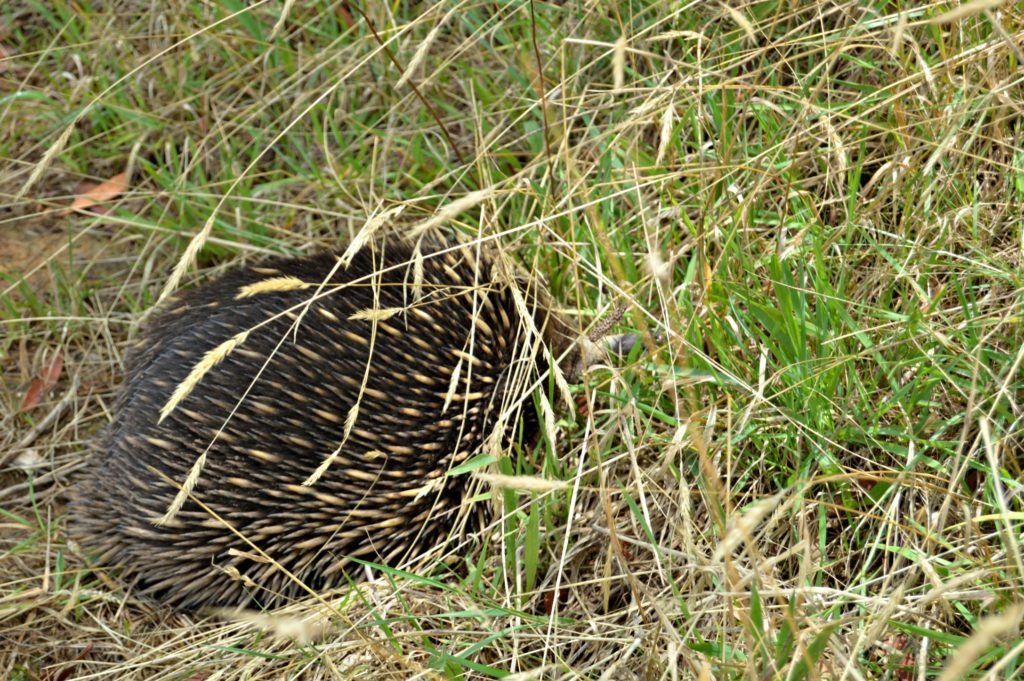 The yard at Sutherland was also perfect for the kids to run around and burn off their carb-laden lunch.  Because of this winery’s hilltop beauty and distance from the road, I’d definitely stop here again!   Tip:  You must try the tempranillo- I took mine all the way to Tassie. 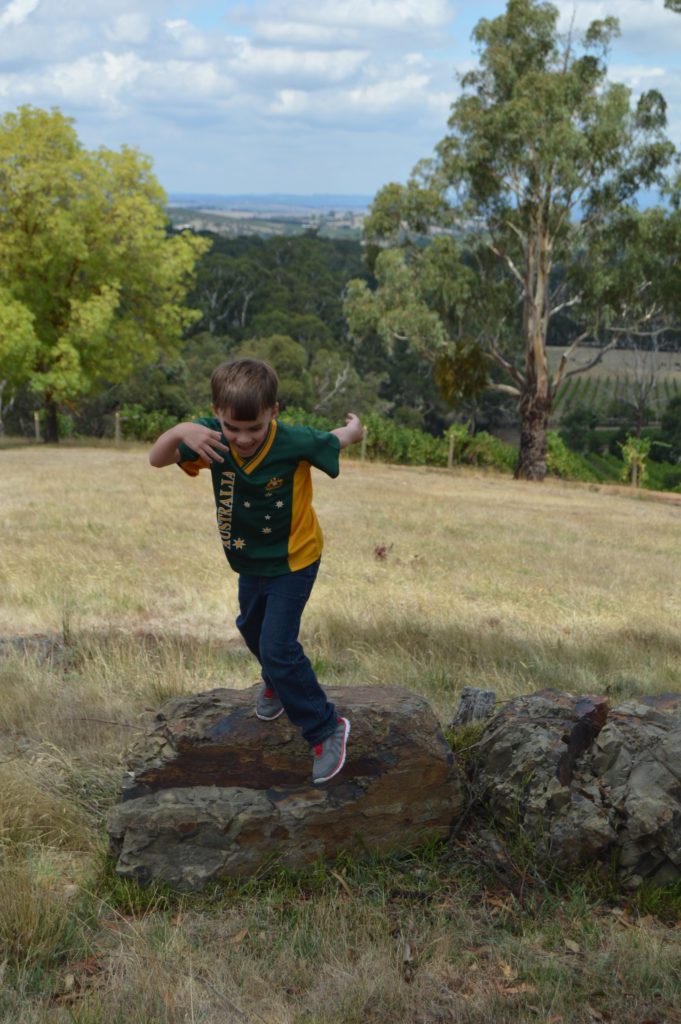 Our last stop was the Yarra Valley Chocolaterie and Ice Creamery.  This stop was very family-friendly.  I mean, what says kids more than sweets?  The Chocolaterie also had rugby and soccer balls in the yard for the kids (and big kids) to enjoy.  The ice cream was rich and creamy- I didn’t take a chance with the Vegemite chocolates.  That’s where I draw the line! 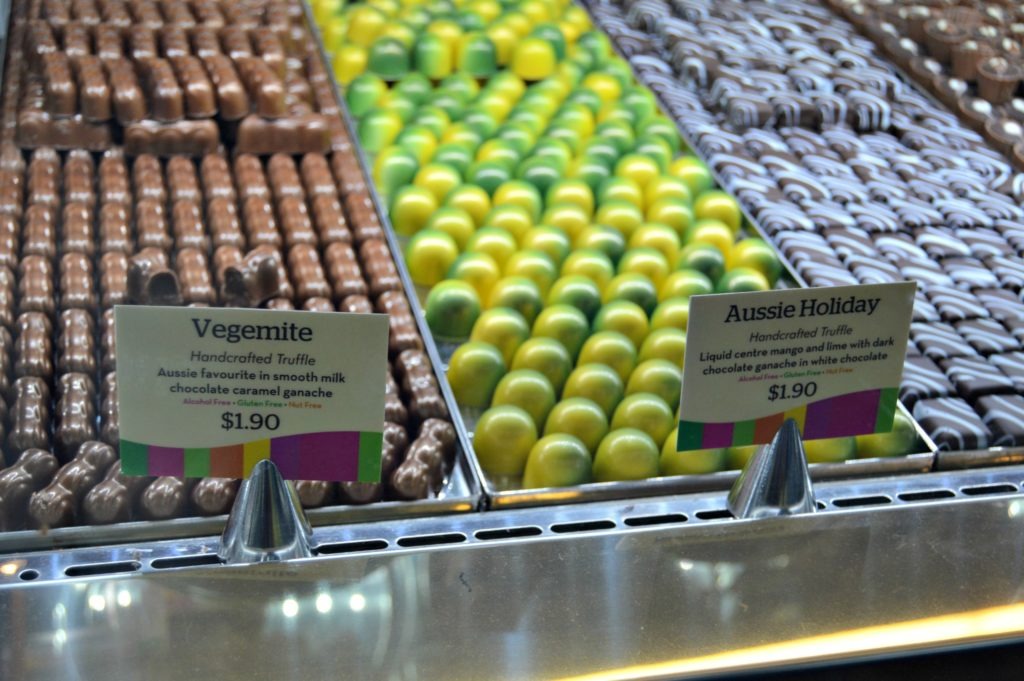 What may have been the biggest drama of our travels was that my dad actually lost his cell phone at the Chocolaterie.  The tour company, Wild Wombat, helped us so much with this– and I’d recommend them to other travelers.

The next morning we had cake for breakfast, thanks to this big guy’s 6th birthday…then we headed to the airport for our flight to Hobart.  Until we meet again, Melbourne.  There’s still so much more to explore.

TIPS FOR YOUR STAY IN MELBOURNE:

We flew from Sydney to Melbourne on Virgin Australia.  The one-way tickets were about $97 AUD per person including the credit card fee, and we didn’t have to pay extra for bags and snacks like you do on JetStar.  I would fly Virgin again.

Upon arrival in Melbourne, we caught the Skybus from the airport to the Southern Cross station.  Once at Southern Cross, the service provides a shuttle to the hotel.  This was quick and seamless, the only drama we had was getting the double stroller 4 bags 3 kids on and off of the bus.  The price was about $45 AUD for our family which was cheaper than a taxi — and the bus had free WiFi! 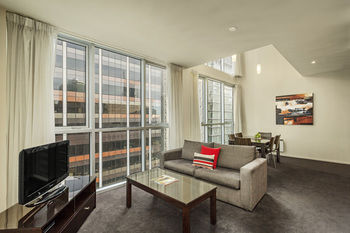 We stayed at the Quest on William.  The Quest on William features serviced apartments in a close proximity to the city.  The rates were reasonable, and we were able to easily reach tourist areas such as the Southbank, Federation Square, and Queen Vic Market.  The cost was about $1100 AUD ($800 USD) for 4 nights, which was more than we typically like to spend, but we were there during the Australian Open and we chose to get a 2 bedroom instead of having 4 nights with the kids on top of us (you can’t put a cost on sanity. ;))

I would definitely stay here again.  There were two 7/11s within walking distance and we were able to save money by buying breakfast cereals

, juice, and milk and eating in the room.  We also ordered in pizza one night.  So what we may have paid extra for accommodation, we made up for it in the cost of food.  Check current rates!

Last, but not least, tickets to the semi-final of the Australian Open aren’t easy to get, so I’d like to thank our Aussie friend, Louise, for sitting on hold for 90 minutes THE DAY THEY WERE RELEASED to secure us some amazing seats.   Thank you, thank you, thank you!  You Aussies sure are hospitable.

Have you been to Melbourne?  The Yarra Valley?  Maybe you’ve tried Vegemite chocolates? 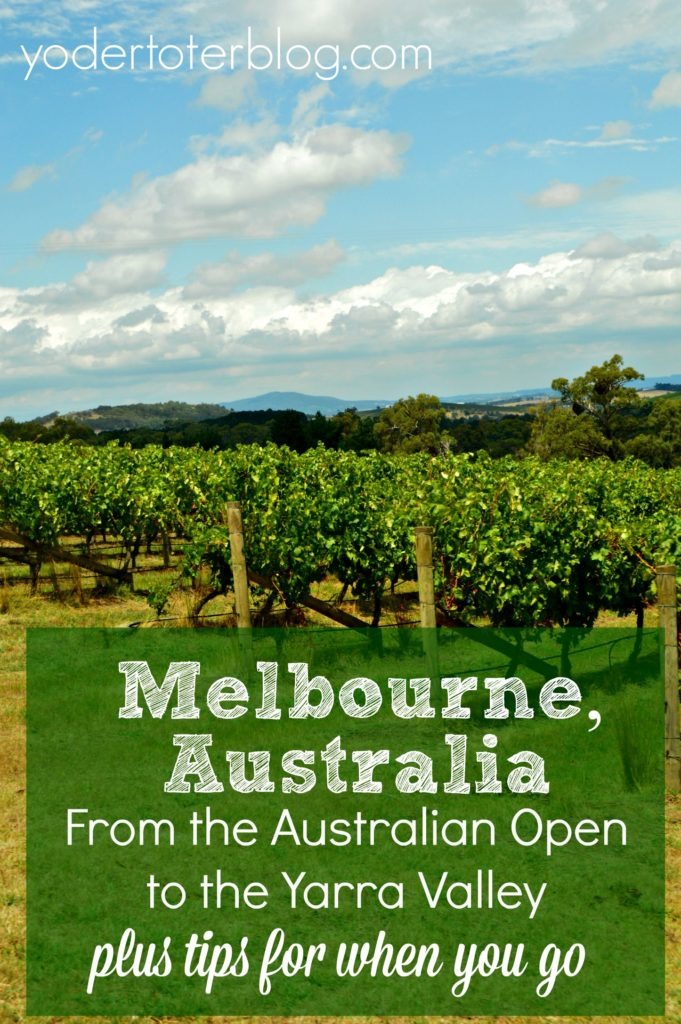 *This post contains affiliate links, at no cost to you.

5 thoughts on “Melbourne, Australia – Family-friendly daytrips plus tips for your stay”