?? Mine do!? Last year while Mr. YT and I were painting rooms and fixing up the new house, the kids watched a LOT of movies! The LEGO Movie was on repeat, and in the previews, there’s a short commercial for LEGOLAND. This is where my kiddos became obsessed with the idea of visiting! They begged and pleaded and told us that LEGOLAND was the ONLY place they really, really, wanted to go!

When thinking about Christmas and the load of items the children receive and then lose interest in, we decided that we would rather DO something with them- create family memories.? One of these memories would be a stay at the LEGOLAND Beach Retreat Resort in Winter Haven, Florida. I’m so glad we choose to stay on-site at the resort, and I can’t wait to tell you why! 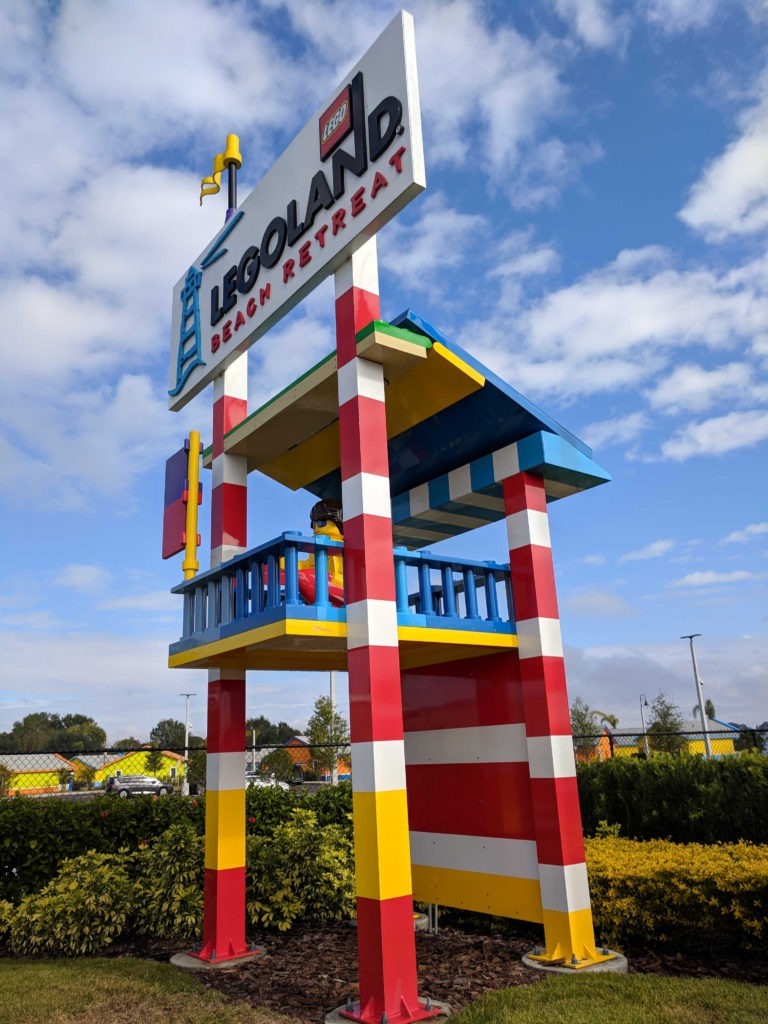 Why we chose to stay at the LEGOLAND Beach Retreat Resort

We chose the LEGOLAND Beach Retreat Resort because I knew that both my sons and daughter would like the style of the room. I also liked the idea of having a colorful home and pool. I’m always drawn to more of an Airbnb-style accommodation and the Beach Retreat Resort seemed to fit the bill.

Here is a list of all the things I enjoyed about Florida’s LEGOLAND Beach Retreat Resort, along with those things I didn’t like:

The property is very family-friendly. In the room, the bathroom has a toilet seat with the child’s potty seat attached

. The bathtub was situated so that parents actually had room to bathe their children!

The bunk bed has a trundle underneath so the room will sleep 5 (a rarity in the hotel world).

In the center of each cove is a small playground. In the mornings, while we packed up things for our day at LEGOLAND, the kids played on the playground and we watched them from the window in the room.

The pool is heated and has large, floating LEGO! The zero-entry kid’s section is perfect for little ones. There were 3 lifeguards on duty and a supply of life jackets 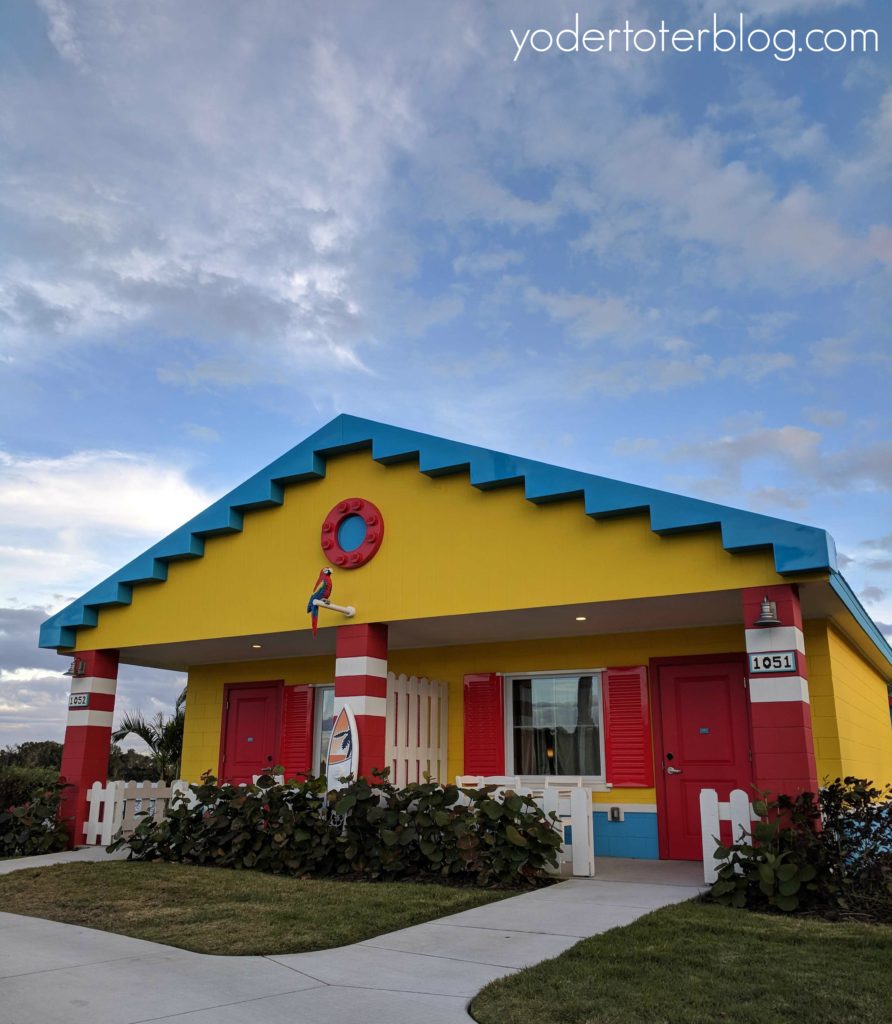 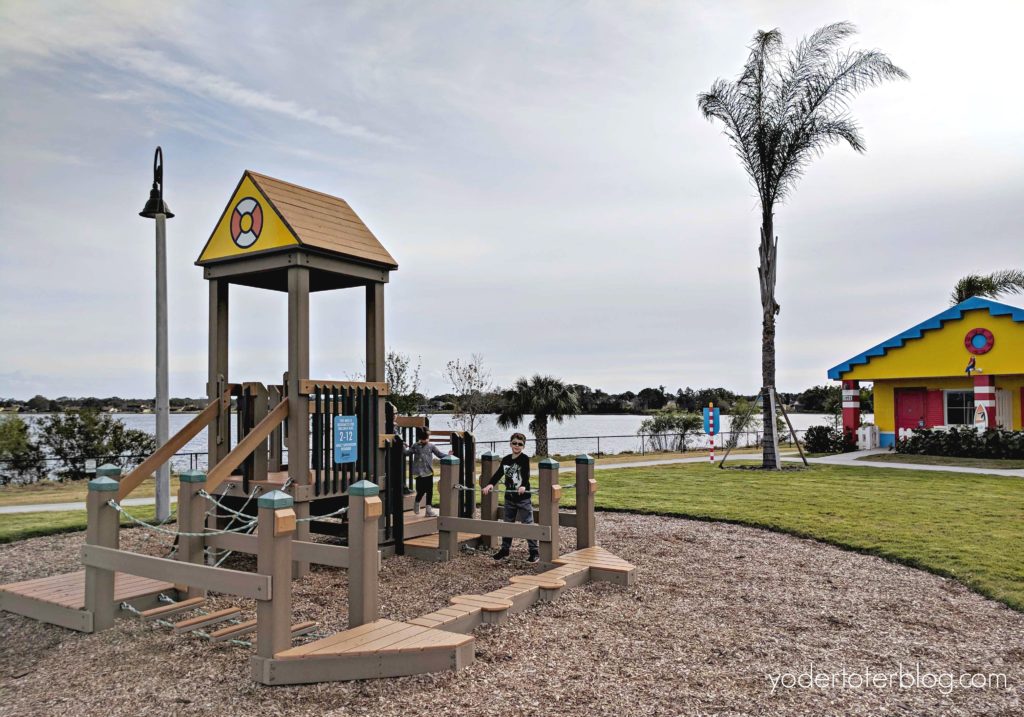 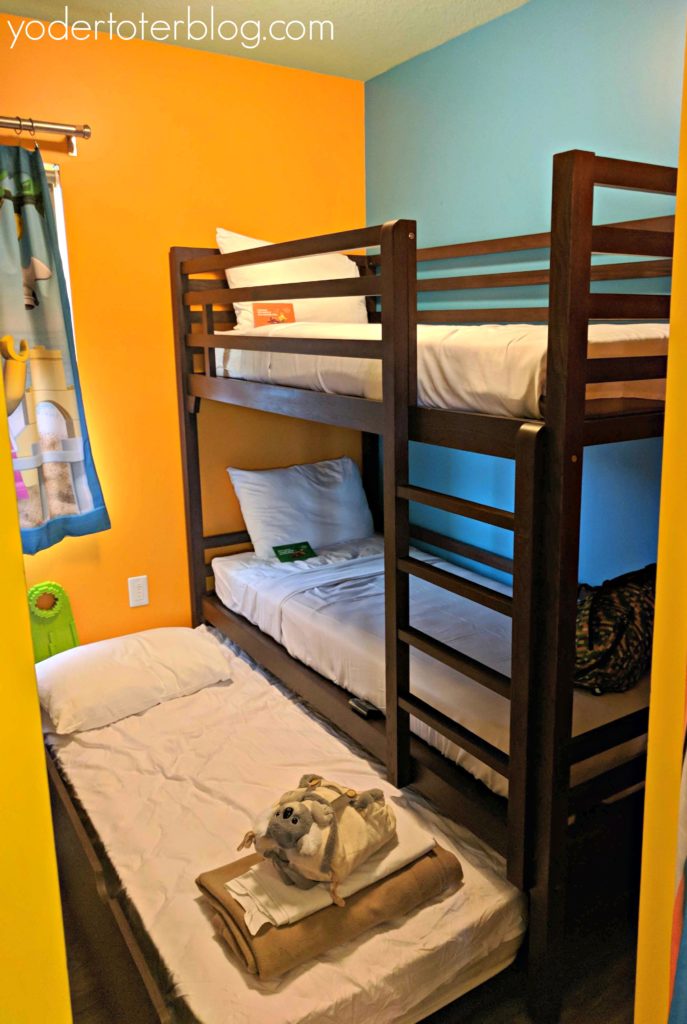 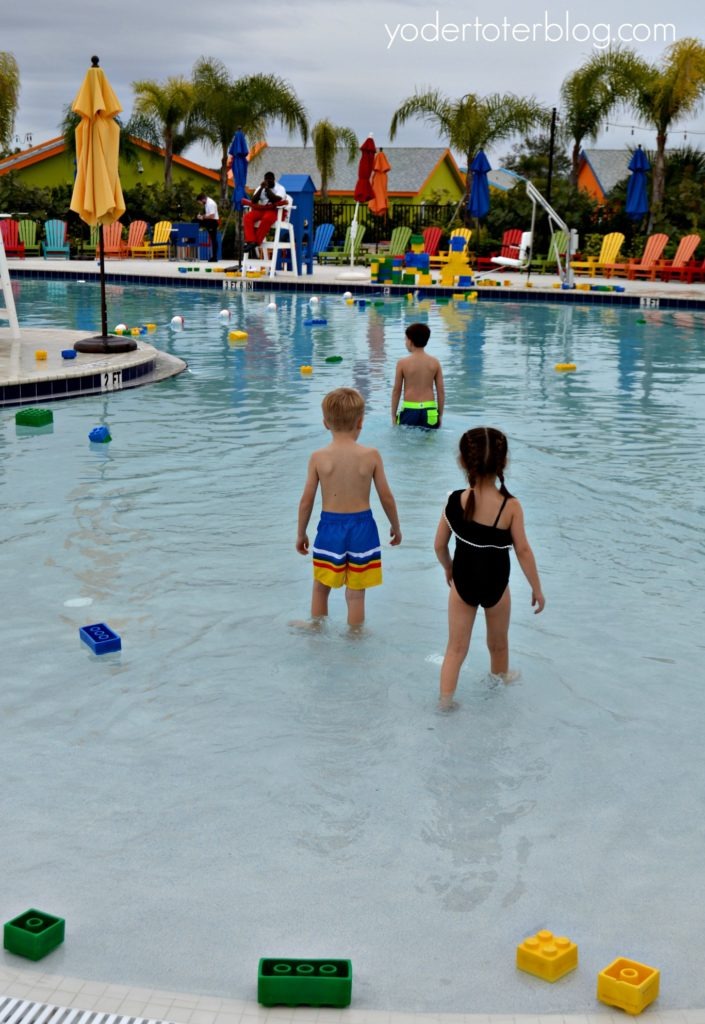 A tour of our room:

The Resort restaurant, Sandy’s Castle Restaurant, offered meal deals! These may change seasonally, but we took advantage on both nights of our stay. The first night we were able to get 2 appetizers, 2 adult entrees, 3 kids meals, and Coke products for $50. The second night the deal was 1 appetizer, 2 pizzas, and Cokes for $40. We found these deals to be very helpful with our trip budget. I will say, the food was average.  The kids loved it (who doesn’t love pizza and cheeseburgers?), and at the price, I could not complain. The nachos were our favorite- definitely try them!

While the adults appreciate the affordable dinner, the kids LOVED the visits from LEGO character “Max.” The appearance is included in the cost of the dinner and you don’t have to make a reservation. I researched getting breakfast with some silly-speaking yellow men at another resort, and the cost for our family would have been over $130!? For breakfast!?!? LEGO creates so much value for the on-site stay.

A buffet breakfast is included for resort guests. From hot items like sausage and eggs to cold cereals and yogurts, the variety was appreciated. I found this to be a value-added item as most similar resorts will charge an arm and a leg for breakfast. Also, during breakfast, the servers tried to sit families close to the large sand castle building area. This gave parents some time to actually eat their breakfast. 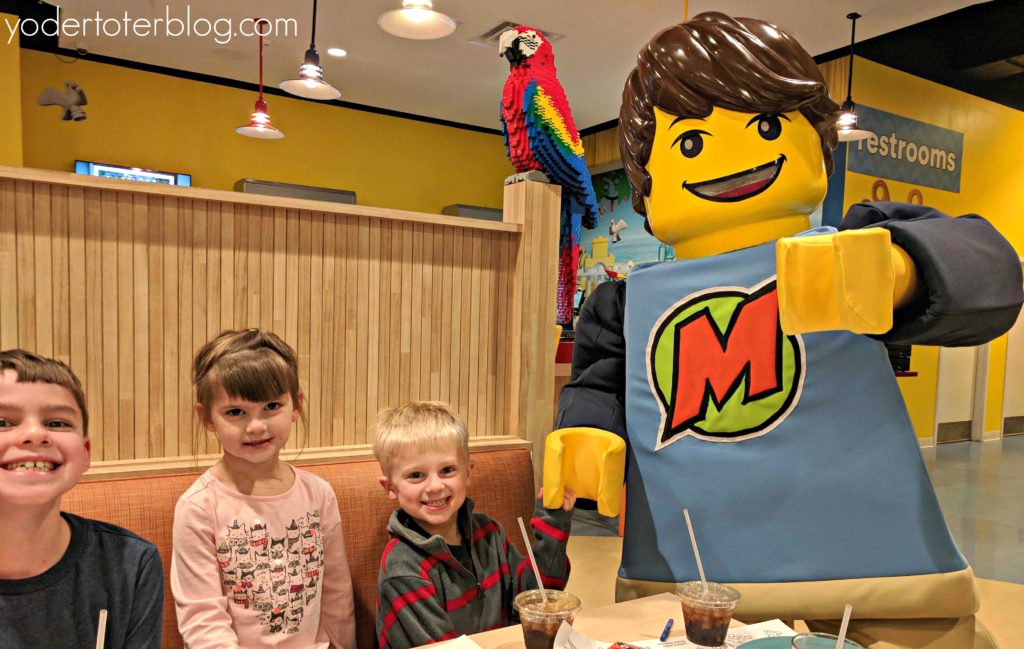 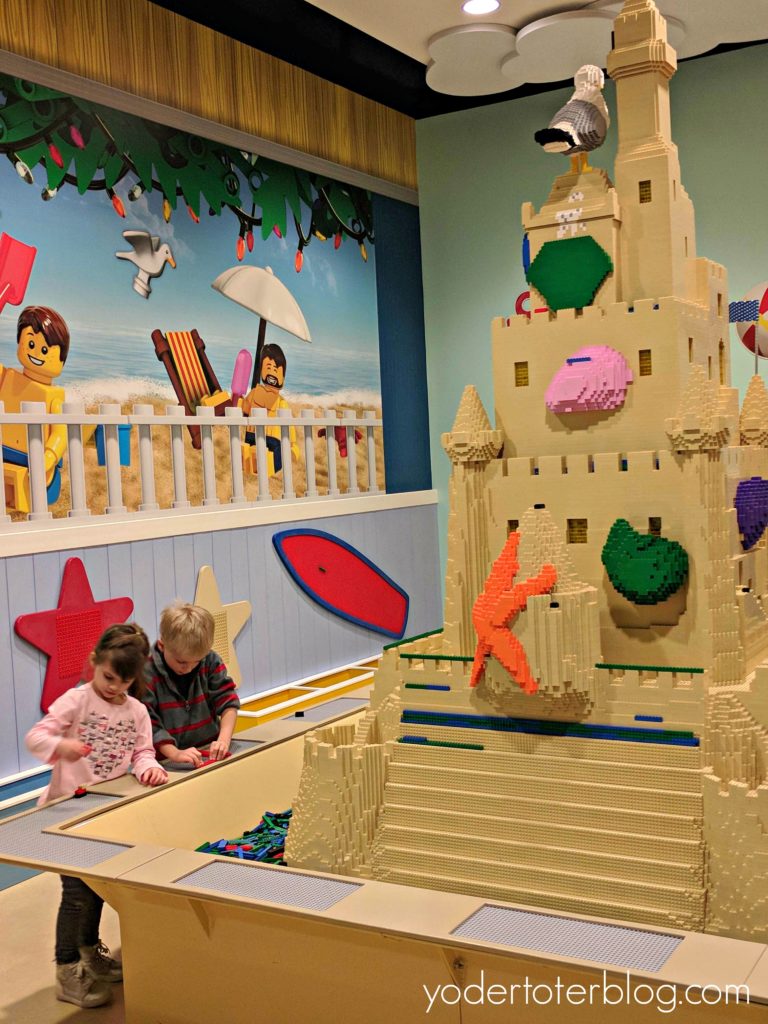 The room felt small. Even though it was half of a cottage, it was no bigger than a standard hotel room. I liked that the kids had a separate space, but because the room is separated by a curtain, not a door, light and noise were an issue. Mr. YT and I tried to stay up and watch TV, but Olen could see and hear it, so we had to just turn everything off and try to sleep. This isn’t a huge deal, but I definitely prefer a true suite.

The bathroom layout and potty seat were a hit, but for all the thoughtful things they provided, a stool for the sink and a soap dish would be so helpful. I know that’s a little nit-picky.

As a mentioned above, the dinner items (esp steak and the pizza) were just okay. The buffet breakfast, however, was ample and tasty.

I’d definitely recommend a stay at the LEGOLAND Beach Retreat Resort, Florida. Our kids were immersed in the LEGO culture for 2 days and they loved every moment. The shuttle to and from the parks is convenient and easy. A resort stay also includes free parking at LEGOLAND which we used on the last day after check-out.

The LEGOLAND Beach Retreat Resort offered so many on-site benefits – the meal deals, free breakfast, free LEGOLAND parking (normally $17), and the character dinners. Our kids are already asking to go back and it’s not something that my husband nor I oppose!

Have you been to LEGOLAND? Would you consider staying on-site?

** I was given a press rate for our stay. All opinions are my own ** 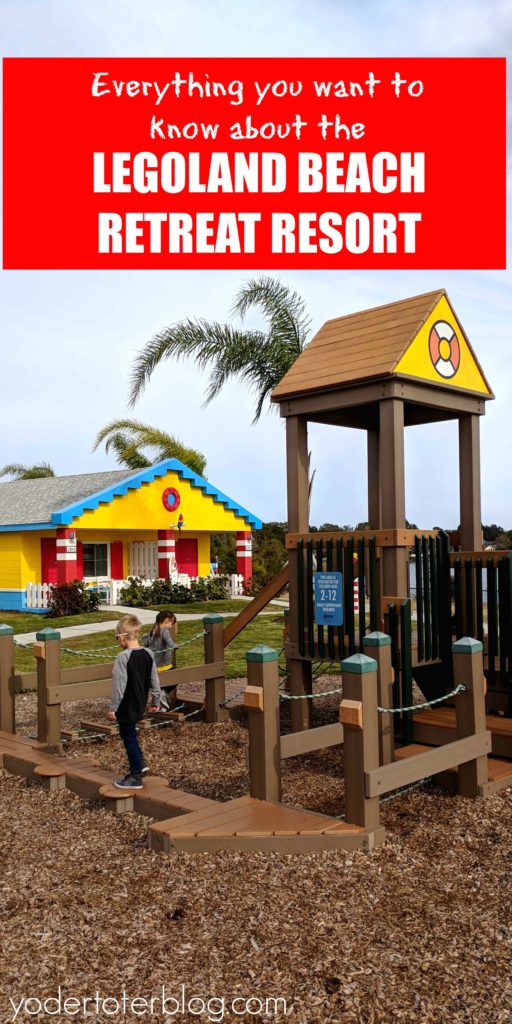 5 thoughts on “Oh my G-O-S-H: A stay at LEGOLAND Beach Retreat Resort in Florida”