10 Things to Know Before Visiting Australia

Australia has been near and dear to my heart since I spent a year as an exchange student Down Under. Since my time on Exchange, we’ve traveled to the country four times, this last time a rushed surprise trip. During my time as a travel agent, I shared my knowledge of Australia with many, and here’s my advice on things you must know before visiting Australia. 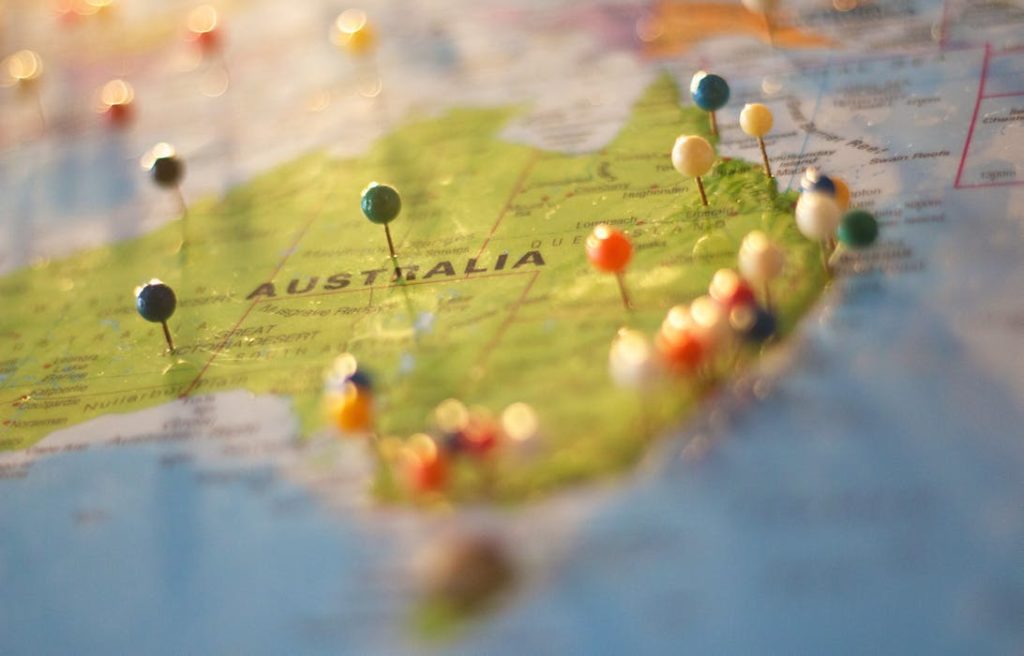 1. Australia is bigger than you think

You wouldn’t expect your friends visiting from overseas to cover the best of America is 10-12 days, yet Americans routinely think they can see all of Australia in the same time. Australia is a big country!

Before visiting Australia, you’ll need to make a (short) list of your must-see locations. In 12 full days, you could probably hit Sydney, Uluru, and the Great Barrier Reef, but you’d have to save Melbourne for next time. Think you’d like to drive through the Outback? From Adelaide in the south to Darwin in the north, it is approximately 1875 miles or 30+ hours of driving. Unless you have 3-4 weeks, you’ll probably be flying from place to place.

2. Australia is a vast country with a variable climate

From the Snowy Mountains to a tropical rain forest, Australia has many climate zones. If traveling in the winter months of July and August, you might wake up needing a heavy jacket in Melbourne, while in Cairns it would be a muggy 80 degrees Fahrenheit. In the Outback, freezing mornings can turn into warm days, requiring plenty of layers.

Make sure you’ve thoroughly researched what you’ll be needing while visiting Australia. If you’re in a major city, buying forgotten things at a Target or K-Mart, it pretty easy, but if you’re hoping to road trip further from the main cities, you’ll need to be prepared.

3. American citizens will need a Visa

No, not the Visa v. Mastercard debate.  If you’re traveling from the USA to Australia, you will require an ETA – Electronic Travel Authority. This is Australia’s way of approving you to visit their country. You can get one through the official government link HERE.

The ETA is electronic – unlike other countries, you don’t need to mail your passport. Make sure you thoroughly read through the requirements and submit your info (plus $20 AUD) well before your flight.

You know Australia is a large continent, but did you know that most Australians live along the coast? Australia is also very urbanized. In Victoria and South Australia, over 75% of the population lives in Melbourne and Adelaide, respectively.

5. Most travelers arrive through Melbourne or Sydney

If you’re arriving from the USA, you’ll most liking be arriving into either Sydney or Melbourne. We’ve flown to and from both of these airports and here are our tips:

In Sydney, the airport is connected with downtown via the Airport Link train.  You can connect at Central Station for suburb stops, or take the Airport Link into Circular Quay to reach Sydney Harbour and the ferries. The same works in reverse.

Melbourne’s airport is over 13 miles from downtown. The best way to reach downtown is via SkyBus. SkyBus will take you to the Southern Cross station in Melbourne, and from there you can transfer to a free hotel shuttle. We found this to be the fastest and most affordable option to get to our hotel – especially for a large group that would not fit into one taxi. What’s even better? SkyBus offers free WiFi, so you can check-in with family and let them know you’ve arrived.

6. Speaking of WiFi, free internet is hard to come by

Have a plan in place before leaving home, because while traveling in Australia, free WiFi is hard to find! Our hotels did have WiFi, but it does run slower than most hotel connections that you are used to. Even staying with friends, they asked that we not browse the day away, as Australians still pay for the data they use in their homes. Yes, it’s not unlimited!  That said, you understand why not all cafes offer free WiFi.

7. Australia does have budget airlines and competitive flights between cities

While Qantas bears the logo of the kangaroo tail, there is competition among airlines within Australia. We’ve flown both JetStar and Virgin Australia and had positive experiences. Tiger Air is another airline, but due to less than positive reviews from my local friends, we avoided them. JetStar and Virgin Australia service many cities throughout the country. Check with each direct website for pricing on luggage, as it varies per the type of ticket you’ve purchased.

8. Things to know about traveling with children within Australia

We often dined at “clubs” – places like the Royal Services League, Bowling Clubs, Golf Clubs – places that are set aside for groups of people that you’re able to sign into as a guest. Because many of these places cater to members, they will have something for the children- a kid’s room, a playground, etc. Service at the club or pub is typically a “place your order a take a number” type! We liked that we could get the kids drinks beforehand. Note though, there aren’t typically kids’ meals or child-sized drinking cups. You may want to pack a few disposable sippy cups in your bag, as we did for our two-year-old.

Dining in Australia is usually more expensive than in the USA. One night in Sydney we stopped at a local pub for dinner, for four meals (the youngest split one), 2 beers and 3 small sodas, our bill was over $105 Australian. This was before any tip – which is not required, but a nice gesture.

9. You’re more likely to fight a koala than step on a snake.

Ok, not completely true! Haha! But while Australia is host to a slew of deadly animals, you probably won’t see them. Yes, there are snakes and spiders, but common sense behavior will help you to avoid a bite.

If you’ve left your shoes on the floor overnight, shake them out in the morning. Redback spiders in the Sydney area likely to make shoes their home. If you’re walking on a trail, pay attention not a step on a snake. Just keeping your eyes open goes a long way.

That said, a sighting of kangaroos and koalas is what most overseas visitors come for! While they have the reputation of being cute and cuddly, neither are! Feel free to admire- from a distance.

10. Pig out on Chipotle before leaving home, because Mexican food is hard to come by.

At the risk of sounding like an American elitist, I extend my most compassionate plea to warn you about the lack of Mexican food. Obviously, Australia has little-to-no Hispanic population like the US of A, and while you’re now able to pick up some taco shells and Old El Paso at Woolworths, there’s little by way of Mexican restaurants. Prepare accordingly. 😉

Have you been to Australia?? What’s your #1 tip?

For more itinerary tips check out Travel with Me 24/7. 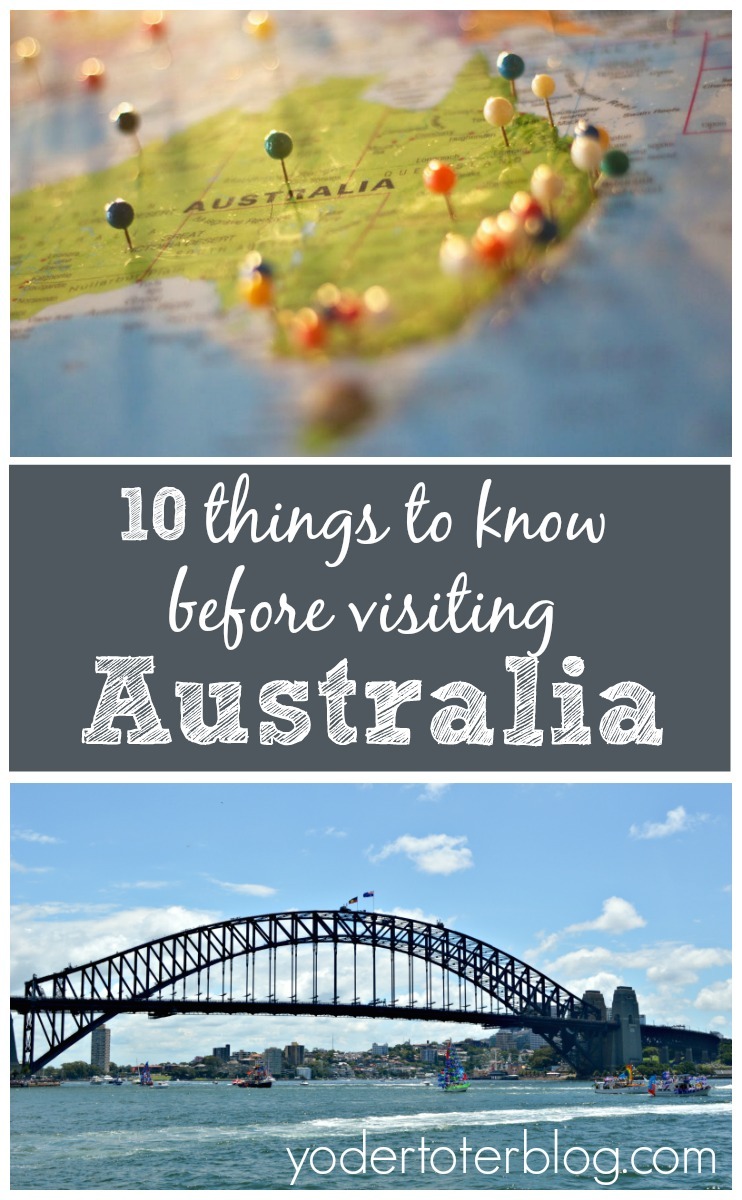 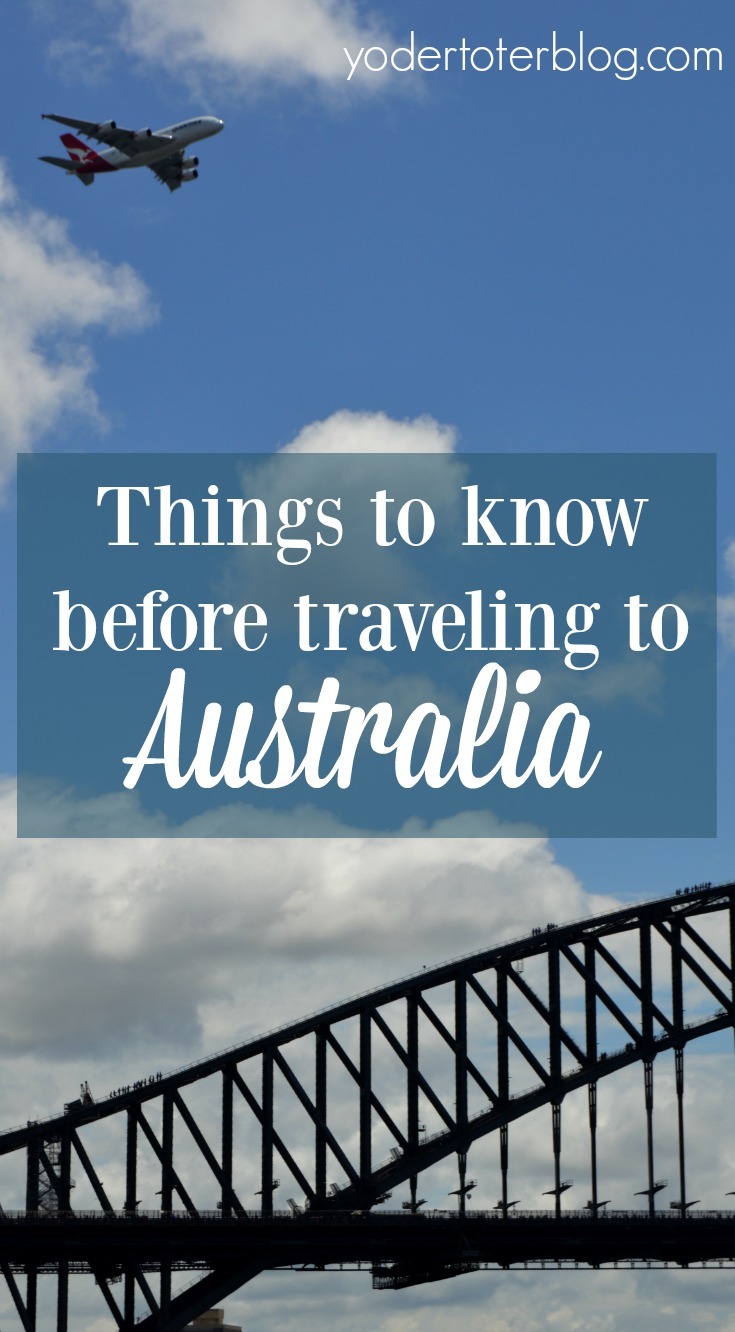 2 thoughts on “Traveling to Australia? Things to know before you go”