John Fenton came to Millersburg, Ohio in 1908 with a dream and a sketchbook. As the name implies, John was of the glassmaking Fenton family of Williamstown, West Virginia. He came to Millersburg knowing he could do something bigger and better than his family. He didn’t desire to make traditional glassware (or do traditional business), John Fenton wanted opulence and prestige. Out of that desire for extravagance, came Millersburg Glass.

Fenton started Millersburg Glass in 1909. Named after the county seat of Holmes County, Ohio; Fenton’s short-lived attempt at the glass business adds to Millersburg’s history and her surroundings.

I grew up in Millersburg, yet visiting the Millersburg Glass Museum helped me to feel more connected to the place I once called home. If nothing else, I changed my opinion on my parent’s small glass collection and now appreciate its beauty and worth, an exotic product for a simple place.

Millersburg Glass and its role in Holmes County

The most popular and valuable pieces of Millersburg Glass are the radium Carnival Glass. Full of color and light, its iridescent quality makes it valuable among collectors. It’s not difficult to see why!

Even more impressive, In 1909, John Fenton was commissioned by the Queen Wilhelmina of The Netherlands to create the Holland Vase, later called the People’s Vase. The vase depicts dancing in the streets after the birth of her daughter because Holland residents worried Wilhelmina may leave the throne without an heir. The blue People’s Vase is the most valuable piece of Millersburg Glass, bringing in $155,000 at a glass auction! Of the crate sent to Holland containing 10 People’s Vases, 8 are accounted for and 3 are now owned by the museum!

The Amethyst People’s Vase with the ruffled top was acquired in December 2018 and the Marigold People’s Vase was acquired in March 2019. As a result of these acquisitions, the Millersburg Glass Museum now displays three of eight known People’s Vases in the world. To the best knowledge of collectors, the others are in private hands in North Carolina, Texas, and Pennsylvania. The blue and the marigold vase are believed to be the only ones of their kind in terms of color.

Fenton created simpler pieces, too. Millersburg Glass had a “country kitchen” collection. The pattern was more affordable and thinner than the crystal glass. I’m sure Fenton was inspired by the rolling cornfields outside of Millersburg for his pattern on these pieces.

John Fenton didn’t just use his Millersburg Glass business JUST to buy himself nice things (although you will learn about how Fenton’s return to town with a fancy car started the demise of his business), he also gave all churches (and investors 😉 ) in town an Ohio Star punchbowl. Similar to the punchbowl pictured below, at the time these cost $4.50. Residents of Millersburg were also given a toothpick holder.

Millersburg, Ohio is located at the intersection of State Routes 83 and 39 and US Route 62. In Holmes County, all of these roads are designated as the Amish Country Byway. This scenic route winds through 164 miles of roadway in Holmes County, Ohio; but most of John Fenton’s story sites reside within a few blocks of the town square. Along with visiting the Museum, if you’re looking to experience Millersburg Glass through the Amish Country Byway, I recommend:

Stop and see the Holmes County Courthouse. The Courthouse Bowl was made to depict Millersburg’s Courthouse. Remember, Mr. Fenton could have named the glass company after his own name, but he chose the name of his adopted home. 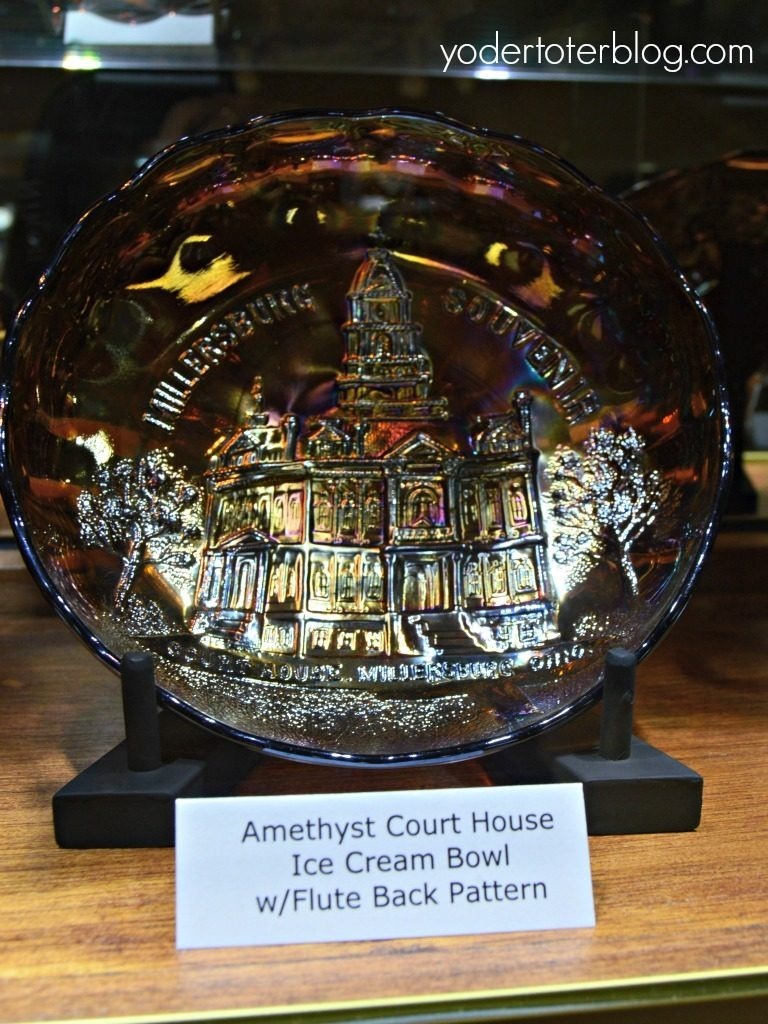 Continuing your connection to Fenton and the Amish Country Byway, stop and revel at the construction of local churches. Millersburg’s Presbyterian, Lutheran, and Christian Church were all standing when Fenton came to town. Remember, each of these churches received a punch bowl set. I wonder how many church socials involved the use of Millersburg Crystal?

A short drive from the Byway you’ll find the restored Depot and trailhead for the Holmes County Trails. Formerly the railroad line, this multi-use trail frequented by the local Amish buggies. Walking down the trail, you’ll have time to consider how Millersburg Glass flourished because of its production right next to the rail line.

The depot is located at 62 N. Grant St., Millersburg.

Just off of SR 39 (part of the Byway), Millersburg’s Oak Hill Cemetery is the final resting place of John Fenton. Fenton is buried next to his wife and daughter (his daughter died of the flu). His tombstone does little to tell the story of his life- the plain stone exhibits no signs of his artistic personality or design. The stone is located in the NE quadrant of the cemetery. Note: John Fenton’s birth year is wrong.

Final thoughts on Millersburg Glass and the Amish Country Byway

The Amish Country Byway showcases the beautiful land that Amish and Appalachian immigrants converged upon. Both valued a strong work ethic and family values. John Fenton came to Millersburg knowing he’d find laborers willing to do everything from the most skilled craftsmanship to the laborious job of packing glass into barrels.

Follow Fenton’s drive into Millersburg and make sure you allow time just to gaze at the beautiful barns, farmland, and cornfields. If you see Amish families, remember that they collect and use Millersburg Glass, just like the English.

Have you heard of Millersburg Glass?? Have you taken a road trip on the Amish Country Byway?

Where to stay in Millersburg:  Sleep on the Amish Country Byway at the historic Hotel Millersburg.

** I was hosted at the Millersburg Glass Museum by the Heritage Leader Foundation. All opinions are my own.** 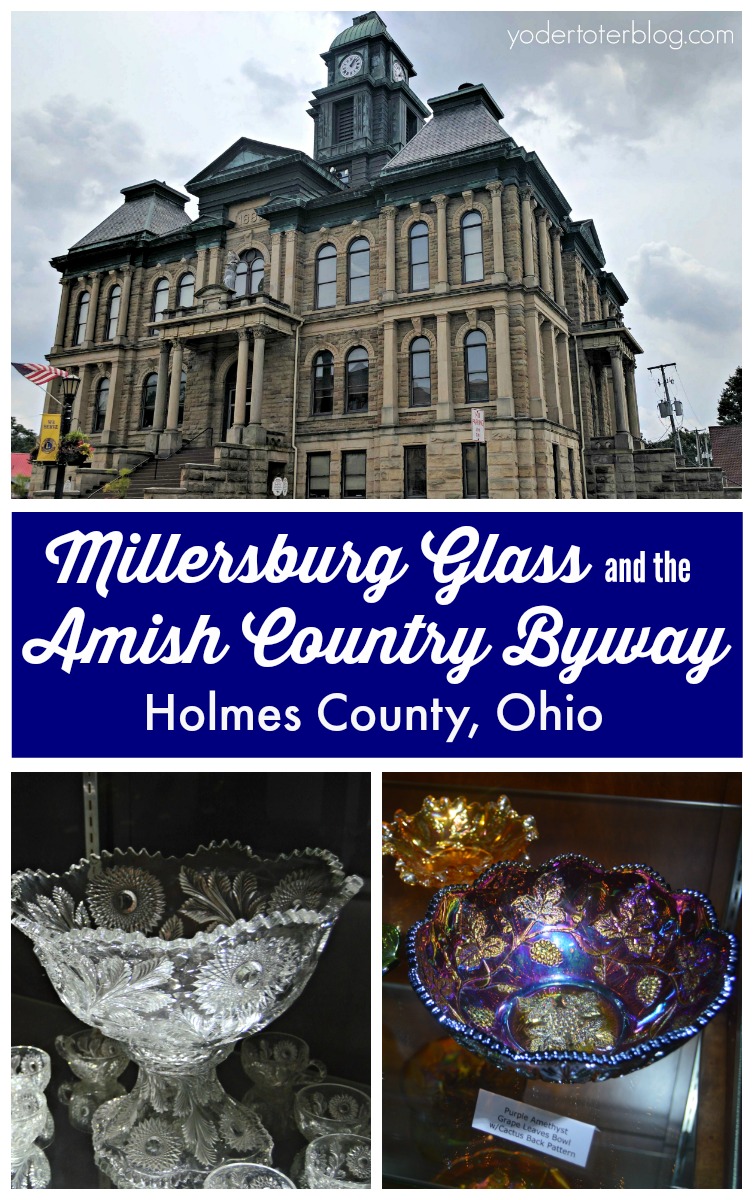