How did the kids do? ?What worked well? What would I change?

It’s hard to believe that we’ve been back from Australia for 6 weeks. ?Time travels quickly! ?While things are still fresh in my mind, I thought I would review our trip in the hopes that it would help others planning a trip Down Under, but also to serve as a future reference for myself!

How did the kids do?

Despite the jokes before our departure that we were “gluttons for punishment” and braver than the masses, the kids did exceptionally well on the flights. ?The trip over was smooth sailing. ?We arrived in Dallas with about 2 hours until our connecting flight. ?This served as a very quick turnaround considering we needed to change terminals, eat something, and change the kids into their jammies (in hindsight we could have done this on the plane).

We heard Qantas reps offering premium economy over the loudspeaker so we asked at the gate if there was a chance they could upgrade all 7 of us (Did you know my parents went, too?). ?The gate agent told us there was no premium economy, but for $250 TOTAL he would give us a row across of 10 seats! ?SOLD! ?This was really a brilliant upgrade. ?Qantas made some extra money and we were assured that no one could try to squeeze into our space.

The kids were extremely excited to have their own TVs and remotes, and after a few hours they hunkered down with their blankies and fell asleep. ?The flight from Dallas was about 16.5 hours (although scheduled for 17). ?They woke up with nearly 5 hours to go and were entertained by Transformers, Peppa Pig

, and the like. ?Kudos to my mom for packing some Lucky Charms

because C chomped down on them while waiting for breakfast service. ?I will say, Qantas has exemplary safety records and comfortable planes, but their food service could use a 1-up. ?I had to go scouting for a cup of coffee about 14 hours into the flight. ?It seemed like the food/beverage service was pretty non-exist from hour 4 to hour 14.

The first day in Australia we were all walking zombies and in bed by 7 pm. ?The first morning the kids were up bright and early at 4:45. ?The next day they made it to 5:45 am. ?The first week was full of early mornings as they adjusted to the time change. ?January is summer Down Under so it was daylight for much longer, whereas we’d just come from the darkness at 5:30 pm. ?Overall though, sleep was not an issue with the kids. ?They shared a space everywhere we traveled and we only had a few nights where we had to tell them to settle down!

Probably my favorite part was seeing my sociable oldest make so many new friends. ?Our last trip to Australia was in 2008 and since then, most everyone has had babies! ?He is still talking about his new buddies. ?Probably the most heart-warming thing he said to me was just a couple of weeks ago when we were talking about the trip and I was lamenting how much I miss Australia he said to me, “Mommy, the problem is we have friends in Australia and here. ?When we are here we miss them but if we move there we will miss our friends here.” ?He is wise beyond his years.

What would I change?

Is there a way this mom of three could make airport security non-existent? ?Ha. ?I love the idea of airport security because it makes us safer, however, going through security SIX times in 3 weeks was A LOT. ?Even though we packed light, we didn’t pack light enough and there just weren’t enough hands to manage our luggage and the kids. ?Our family packed 2 medium suitcases, 4 carry-ons, and a camera bag.? However, my mom and dad each had a suitcase and carry-on so no one really had a hand free to push the stroller or hold a tired kiddo. ?Thank goodness we could hang some of the carry-ons from the stroller

Then to go through security we’d have to pull out the laptop, the toiletries, and fold-up the stroller. ?C holds on to her monkey

and blankie ALL DAY and each time they’d take it off of us to put through the machines so on top of it all, I’d have a crying, cranky 2 yr old. ?I realize this is totally a #firstworldproblem, but it definitely tested my patience and made getting through the airports always the most stressful time of our trip.

In hindsight, I think we would have changed our itinerary to include driving from Sydney to Melbourne. ?I know this would have added two?days of travel, but we could have avoided the drama of getting through Sydney airport. ?It would have also given us a chance to see some of Australia we’ve never visited before. ?In fact, when we go back (it’s not an if) we hope to road trip the entire time.? How awesome does this drive from Melbourne to Sydney look??

We’re so thankful that one of the families we know in Australia allowed us to borrow their 7-passenger SUV while we were in the Hunter Valley. ?This saved us money and was a huge convenience. ?It even made the time we spent visiting host families more like being “home.”

It wasn’t an option because our total trip was 23 days, but I would have loved two or three more days in Tasmania. ?I underestimated how much there was to see and our 4 days there really only allowed us to explore Hobart, Port Arthur, and Richmond. ?I guess that’s just another reason to go back?!

Again, the kids did so well. ?We lucked out on the weather!? New South Wales had it’s rainiest January but it usually happened on a down day or in the morning before our plans. ?I think the most important thing for us was having the kids in a separate room– except for our accommodation in Sydney. ?Being able to put the kids to bed and then have our own space is important to us. ?Luckily in Sydney, my parents acquired a connecting room so we could put the kids down early and then have an adult conversation.

I believe one of the reasons things went well is because we stayed 3+ nights at every stop and did not expect the kids to do repeated early mornings or late nights. ?What we missed out in sightseeing opportunities, we made up for in sanity. 😉 ?In the past year of traveling with the kids, the most important thing I’ve learned is, whatever your expectations are…lower them. ?Ha!

It’s true though, if you go into a travel experience just hoping to have a great time with the ones you love, you’ll usually have a good time. ?If you go into it hoping to cross of x amount of destinations and experiences, you’ll probably leave disappointed. ?Most important for us was having time to spend with my host families and friends and then getting to experience some new things like Australia Day, the Australian Open, and Tasmania. ?Beyond that, I didn’t have a clear list of to-dos.

Our flight schedules worked well until the last day when our flight was cancelled from Sydney to Dallas and we were rerouted from Melbourne to LAX. ?From Los Angeles, they had Brian and I on two different flights! ?Yikes! ?I spent two hours in Melbourne getting us all on the same flight, which actually worked for the better. ?However, we had two hours in LAX to clear customs, go through security again, then walk a mile to a new terminal. ?It was hectic! ?We had no relax time and the four hours from LAX- Columbus were not the best. ?I may have been more cranky than the kids! ?I didn’t have time to upload new shows or anything for the kids and they were hungry (or maybe more truthful, hangry!). ?Nonetheless. we made it back in one piece after 28 hours of travel!

Probably the hardest part of the entire trip was once we returned home. ?Jet lag is legit! ?While we didn’t feel it so much on the way there, it took the kids a solid week to return to normal. ?The first night I was watching cartoons with Jackson and C at 3 am. ?The next night was 1 am. ?I felt bad for feeding my baby dinner at 9 pm, but boy were our bodies messed up. ?I did enjoy those few days of sleeping in until noon. ?That was a first since becoming a mother!

Overall, the trip exceeded our expectations. ?We loved seeing our kids play with our kids’ friends and growing their bond with my Aussie bff. ?We saw more beautiful places and had some wonderful experiences. ?We were truly blessed to take this vacation with our family. ?And, thanks to a great exchange rate and friends who abundantly took care of us for the 10 days in Maitland, we were able to come home WAY under budget! ?Woohoo! 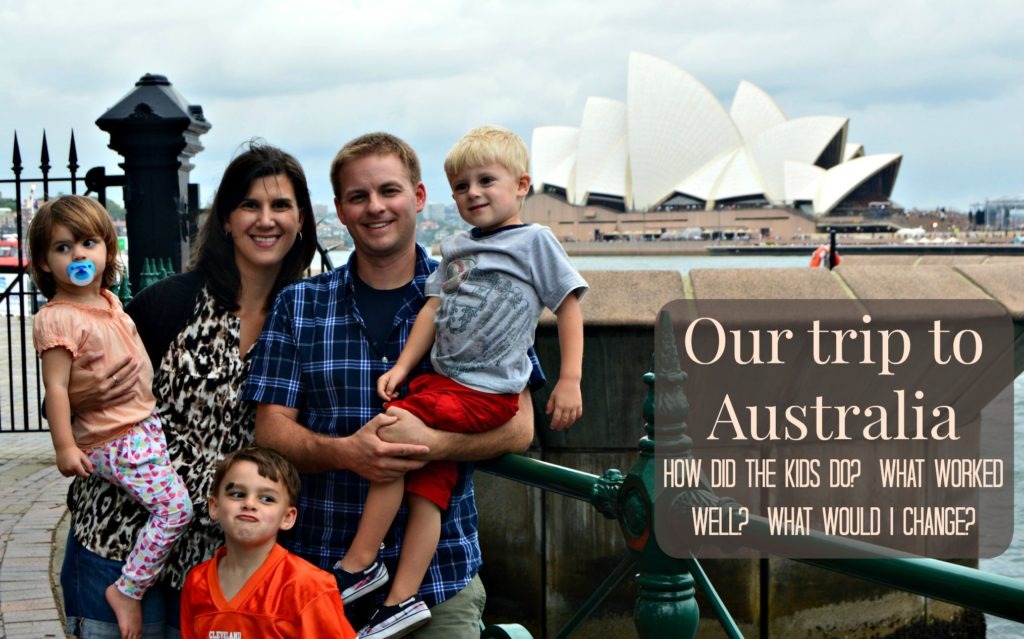 Have you taken a major trip with your kids? ?How did it go? ?Did your kids get excited about the bells and whistles on the plane? ?What do you do to keep them entertained?

4 thoughts on “A recap of our trip to Australia”